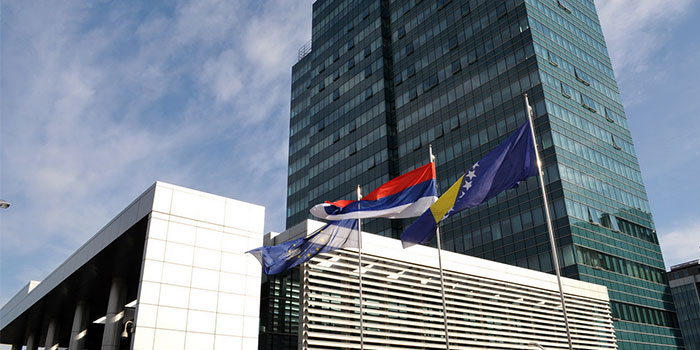 The roads and objectives of the Republic of Srpska economic development are determined by measures defined by the development of the world economy, anticipated price changes on the international market and the expected rate of economic growth of countries in the region, especially of the significant foreign trade partners of the Republic of Srpska. Macroeconomic indicators point to some progress in the economic sector in the last few years, which is reflected in the overall improvement of business environment, thus creating a favorable business environment for domestic and foreign investors, and solving problems in the financial sector. The acceleration of privatisation by simplifing procedures and reforming the country’s economic policies is the main activity of the Republic of Srpska’s economic sector, being one of the transitional countries.

GDP of Republic of Srpska

The growth in areas such as production and supply of electricity, as well as administrative and ancillary service activities in the largest extent contributed to the growth of the real GDP rate, which amounted to 3.9% in 2018.

The average annual inflation rate should remain stable in the next period, with the projected movements into the interval of 1.2%, and up to 1.4% in 2019. Those are the forecasts of the Programme of economic reforms for the period 2019-2021.

Banking sector in the Republic of Srpska

Participants on the financial services market of the Republic of Srpska are business banks, microcredit companies and foundations, insurance companies, leasing companies, stock exchanges and broker-dealer companies. Additionally, companies for investment fund management are operating in the market.

The economic development of the Republic of Srpska is defined by the programme of economic reforms for the period from 2018 to 2020 which was drafted in accordance with the methodology and guidelines provided by the European Commission. In defining the measures of economic development the following indexes were used: the projection of the development of the world economy, expected movement of prices on the international market and expected rates of economic growth of countries in the environment which are particularly significant foreign trade partners of the Republic of Srpska.

So far, significant results have been achieved in the macroeconomic field in the Republic of Srpska, primarily in the growth of gross domestic products and industrial production, export increases and the reduction of the foreign trade deficit.

The positive dynamics of development in the Republic of Srpska is illustrated by the following macroeconomic indicators. 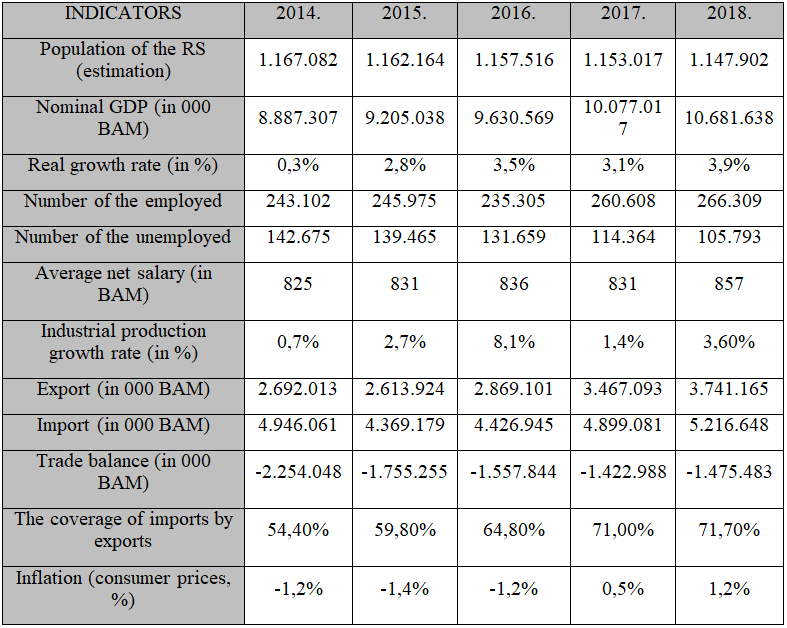 GDP of the Republic of Srpska

Measured by the index of consumer prices, the stability of the prices in 2017 remained unchanged in 2018. The economy in the Republic of Srpska in 2018 had the annual growth rate of 1.2%, which is the result of the growth of crude oil on the international market, as well as the increase of excise on tobacco and tobacco products and their further harmonization with the regulations of the European Union.

According to the economic reform programme for the period 2019-2020, the average annual inflation rate, measured in the consumer price (CPI) index, should remain stable in the upcoming period. The change in 2019 is predicted in the interval of 1.2% to 1.4%.

Average salaries in the Republic of Srpska

By comparing the current state of this area to the state from previous years, it can be concluded that the average salaries of employees in the Republic of Srpska show the tendency of growth, which has been achieved by changing the legal framework.

The positive salary increase in all sectors is visible in the statistical data for 2019, so the average salary after taxation, net wage disbursed in August 2019 according to data from the Republic Institute of Statistics was 910 BAM and is nominally lower for 0.1%, while realistically higher for 0.2% compared to the previous month. Compared to the same month last year, the average salary after taxation, net wage, is nominally higher for 6.8%, while realistically for 6.7%. Average gross salary disbursed in August 2019 amounted to 1,414 КM.

Foreign Trade Development of the Republic of Srpska

The Republic of Srpska from January to August 2019, in foreign trade with foreign operations, achieved the volume of the commodity exchange of 5.528 billion BAM, while the coverage of imports by exports was 76.2%. The observation was made according to product groups in the export structure. The largest participation, eight per cent of total exports, has electricity, while in the import structure medications are the biggest imports, with 3.8%.

Even 74% of its products are exported to the EU countries, while around 57% of products and services are imported from the EU market. The major turnover of all the EU member states, the Republic of Srpska has with Italy, with which it has the degree of coverage of imports by the export of 86.7%.

If we observe the export aspect, the opening of representative offices abroad is also important for businessmen from the Republic of Srpska who have the ability to export their products and services. The office opens up opportunities for better analysis of foreign markets, so that businessmen from the Republic of Srpska can launch their products and services successfully.

The mitigating circumstance, which enables the establishment of cooperation of institutions, but also of businessmen from Srpska with other countries and their markets, is also the fact that the Republic of Srpska is a signatory of a number of regional documents regulating relations from this areas, but also a member of numerous associations that foster regional and other partnerships.

In November 2007, the Republic of Srpska became a member of the Assembly of the European Region (AER), which provides support for the establishment of bilateral and multilateral partnerships of the region in the process of European enlargement and globalization. Furthermore, the Republic of Srpska’s regional representation in Brussels is open to improve relations with other European regions and create stronger ties with the European Union.

In order to improve inter-regional economic, scientific and technical, educational, cultural, sports and other forms of cooperation, the Republic of Srpska has signed several coperation agreements, such as the federal City of Saint Petersburg (the Russian Federation), the Veneto region (province Beluno, Republic of Italy), Troms of the county (Kingdom of Norway).

As a result of the opening of the markets, the launch of the business in the Republic of Srpska means the possibility of accessing an exceptionally large market, without paying customs duties.

The Stabilisation and Association Agreement (SAA) has granted free exports for almost all goods on the EU markets that meet standards, while at the same time the BiH market is gradually being opened for EU goods according to the dynamics agreed on by the annexes and protocols belonging to the part of his Agreement. The SAA between the EU and BiH came into force on 1 June 2015.

After nearly five years of experience in trade liberalisation in the Southeast European region, acquired through the implementation of bilateral free trade agreements, the countries of the region, at the end of 2006, decided to improve their economic, especially trade cooperation, and conclude a unique agreement on free trade, known as CEFTA 2006, which came into force on 22 November 2007. The agreement allows greater transparency and rules of the game closer to the EU standards, as well as access to the market of about 30 million people (Serbia, BiH, Montenegro, Macedonia, Albania, Moldova, Kosovo * (this designation is without prejudice of the status and is in line with Resolution of the United Nations Security Council 1244 and the opinion of the International Court of Justice on the Kosovo declaration of Independence).

Additionally, the free trade agreement with Turkey has been signed, allowing access to the export market of 70 million inhabitants. BiH has a preferential mode with Iran.

Agreements on trade and economic cooperation

Free zones, as part of the territory of the Republic of Srpska which is particularly enclosed and marked and in which the activities are performed under special conditions established by the law of BiH (the Law on free zones in BiH- “Official Gazette of BiH “, No. 3/02 and 13/03), may establish one or more domestic and/or foreign persons. The user of the zone is the founder of the zone and/or domestic and foreign legal entity or individual who performs activities in the zone. The free zone has the property of a legal entity.
In the zone, it is allowed to perform all activities including production, commercial activities and service, except activities that endanger the environment, human health, material good and security of the country.
The entry of goods and services to the free zone and the way out of it is free and is conducted in accordance with the customs and foreign trade policies of BiH. The user of the zone, as a foreign investor, in terms of the law on foreign investments, has equal ownership rights of immovable property as a domestic legal entity or individual, and the right to be free to employ workers from abroad unless otherwise determined by the work legislation of the Republic of Srpska. Taxation of users of the zone is done in accordance with the tax legislation of the Republic of Srpska.

The Council of Ministers of BiH, under the recommendation of the Ministry of Foreign Trade and Economic Relations of BiH, gives approval for the establishment of the zone. The consent of the Government of the Republic of Srpska is required. In accordance with the law of BiH, the economic justification of the free zone exists if the total value of the goods exported from the zone exceeds 75% of the total produced goods in the zone and which leaves within 12 months.

Banking sector of the Republic of Srpska

The Republic of Srpska has made significant improvements to the regulatory framework of the financial sector, as one of the basic assumptions for the development of a stable and healthy financial system.
Republika Srpska’s banking system includes banks, microcredit organizations, savings-loan organizations and other financial organizations whose establishment and operations are regulated by special laws in which it is prescribed that the banking agency of the Republic of Srpska is issuing permits or approvals for work and supervising business.

Republika Srpska’s banking sector makes the most significant part of the Republic of Srpska’s overall banking system, comprised of eight banks with a majority private capital, with the dominance of foreign private equity.

14 microcredit organizations operate in the Republic of Srpska, whereas no savings-loan organization have been registered in this area so far.