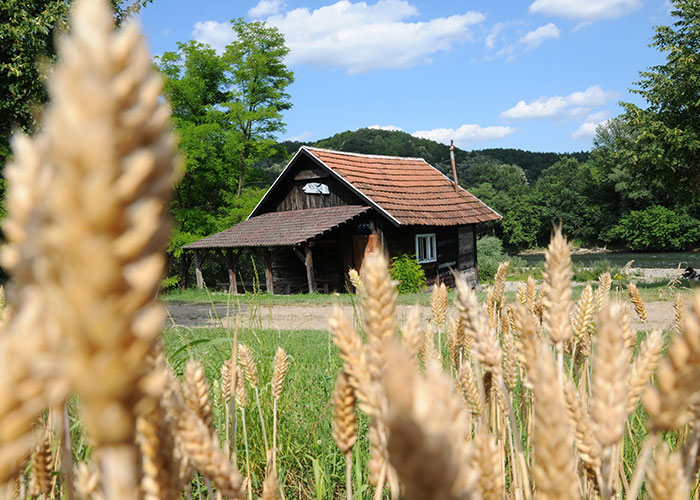 Significant natural potentials combined with favourable geographical position make the Republic of Srpska more attractive as a location for foreign investors. A rich travel network enables good connectivity with the neighbouring countries.  Quality land along with favourable climatic conditions make this area frutile, so many agricultural species can grow here, and it is favourable for livestock farming as well.

Forests constitute more than 50% of the total territory of the Republic of Srpska. The biggest utilisation of this resource is reflected in the wood industry, but also in the production of mushrooms and medicinal herbs, followed by hunting, fishing, use of peat and others.

One of the greatest potentials of the Republic of Srpska is the hydropower potential. The rich river network enables the construction of hydroelectric power plants and mini power plants. Energy is also produced in thermoelectric power plants, and there are also very favourable conditions for the construction of wind farms. These potentials are not yet maximized. However, with current production, the Republic of Srpska achieves significant revenues from energy sales on the free market.

Favourable geographic position and a good infrastructure connection with neighbouring countries make the Republic of Srpska an extremely attractive location for foreign investors. The network of roads and highways allows a smooth transport of people and goods to Croatia, Serbia and Montenegro. The border with Croatia is a direct link with the European Union. The proximity of Dubrovnik, one of the most popular tourist destinations, makes the south of the Republic of Srpska increasingly attractive touris destination, and the real estate prices have been on the rise  in this area in the last few years.

The Republic of Srpska is also known for its good and quality local food. The combination of climate factors, geographical position and quality land provides excellent conditions for the cultivation of numerous plant and animal species as well as organic food production. A significant number of high-quality healing plants grow in these areas, and their  greatest utilization is in the pharmaceutical and cosmetic industries.

One of the greatest potentials for investing in the Republic of Srpska is electro -energetic  potential. The territory is rich in surface and underground waters, has great potentials for the production of energy from renewable resources, but also for the construction of wind farms. Electricity is currently being produced in thermoelectric power plants, hydropower plants and small power plants. The Republic of Srpska is one of the largest power exporters in the region.

51,7% of the total area of the Republic of Srpska is made of forests
30% The consumption of electricity production potential
4+ billions More than 4 billion brown coal reserves, lignite and peat
1 ha 1 hectare of agricultural land per capita

The Republic of Srpska is extremely rich in natural resources, including in particular the quality and unpolluted agricultural land (especially the possibility of organic food production), then forests, electro-energetic potential.

Another advantage for investing in the Republic of Srpska is a good geographical position-the border with Croatia, Montenegro and Serbia and a good road infrastructure towards the countries of Europe.

The total area of agricultural land in the Republic of Srpska is 1,299,000 ha (51.4% of the share in Bosnia and Herzegovina), which accounts for approximately one hectare per capita, which is above the world average (0.24 ha per capita) and European average (0.40 ha per capita).

Clean air, land and water allow  favorable conditions for organic food production in the Republic of Srpska. The plains in the south and west of the Sava River provide ideal conditions for growing wheat, corn and vegetables, and industrial plants such as linen and hemp. The land is not contaminated with chemical fertilisers and pesticides. The greatest potential is in the cultivation of livestock and meat processing into meat products, the cultivation of chickens and the production of eggs, as well as the production of fruits and vegetables. All these conditions provide an excellent environment for the cultivation of a wide selection of plants and animals, with the possibility of harvesting crops and fruits up to three times a year on the same land depending on the culture.

For centuries, warmer areas in Herzegovina  have been the centre of wine production, cultivation of tobacco,  lavender and other aromatic plants.

The Republic of Srpska is also known for its high-quality medicinal herbs, which are used in the pharmaceutical and cosmetic industries.

Potential in forestry and hunting

Total annual volume growth in forests in the property of the Republic of Srpska is about 5,134,000 m³.

The production potential of forests is not only observed through the volume of wood, but it is of an increasing importance for the production of various fruits, mushrooms, medicinal herbs, wooden charcoal, hunting and fishing,  the use of peat etc.

It is estimated that in the forests of the Republic of Srpska, in their dry state, there are about 1.5 kg/ha of quality medicinal herbs, aromatic and edible herbs, about 6 kg/ha of forest fruits, about 500 tonnes/annually mushrooms and other herbs.

From the hydrological aspect, the area of the Republic of Srpska can be marked as of a rich surface and underground hydrological network. All main river streams  hydrologically belong to the Black Sea basin. The backbone of the Black Sea basin is the flow of the Sava river, which is low, and  all the larger rivers flow in-Una with Sana, Vrbas, Ukrina, Bosna and Drina. All of them have a composite character of river valleys with large falls, and have significant hydropower potential. In this regard, Drina is particulary significant because it has the most developed hydrological system and enormous hydropower potential, which is only partly valorized. The Drina river basin represents the most significant unused hydropotential in the Balkans.

So far, nine hydroelectric power plants have been built on the River Drina basin (HEP Uvac, HEP Kokin Brod, HEP Bistrica, HEP Potpeć, HEP Piva, HEP Višegrad, HEP Bajina bašta, RHE Bajina bašta, and HEP Zvornik), which are owned by Serbia and the Republic of Srpska and which have a total installed power of 1,932 MW and an average annual production of 6,350 GWh.

By further development in the basin of the Drina river, production of electricity can be significantly increased. Increased production can be achieved by  constructing new facilities and by increasing the capacity of existing ones. It is estimated that with the construction of new plants, annual production of over 7,500 GWh can be achieved. By building accumulations on the Drina River, not only would the use of a very attractive and, in economic sense, a very valuable hydroelectric potential be enabled, but it would also create additional preconditions for the development of tourism.

Other river flows have great energy, but also an economic significance.

On the Trebisnjica basin area it is planned for eight hydropower facilities to be built, with four hydro power plants built up to now, HEP Dubrovnik 1. phase, HEP Trebinje 1, HEP Trebinje 2 and reversible HEP Čapljina.

In 2016, the new thermal power plant Stanari was built and  it started to work  successfully, 300 MW.

According to the research conducted in the 1980s, around 100 locations were also defined  as places for the potential construction of small hydro power plants of up to 10 MW.

The Republic of Srpska has great potentials for the use of renewable energy resources, such as  wind energy, solar energy, biomass energy and geo-thermal energy.

The Republic of Srpska, particularly its southern part, has been recognized as a great area for the construction of the wind power plants. In accordance with the research conducted by domestic and international experts, the wind potential of the Republic of Srpska has 30% higher utility than the EU’s average.

Furthermore, The Republic of Srpska has significant reserves of brown coal, lignite and peat, whose estimated quantities exceed four billion tonnes. Two main coal reserves are located in the Krajina region and the Gacko area.

The Republic of Srpska is among the largest exporters of electricity in the region since public enterprises and private plants collect the largest income from the sale of electricity on the free market (stock sale or bilateral treaties). Electroportable capacities and interconnection with the neighbouring states allow the acceptance and transfer of considerably larger forces from the current ones, while the mobile losses are below the European average.